The Connection Between Prostate Cancer And Diet

Prostate cancer remains one of the leading causes of death among men. Almost a million new cases are diagnosed per year in the world. Its prevalence continues to grow, especially in countries where men prefer the “western-style” in the diet.

Be sure to exclude foods with a known carcinogenic effect. These are synthetic additives, including sweeteners and flavor enhancers, as well as all fast food. As a result, proteins, fats, carbohydrates, and beneficial micronutrients are building up your diet. Such a diet should be balanced in such a way as to reduce the likelihood of developing cancer. 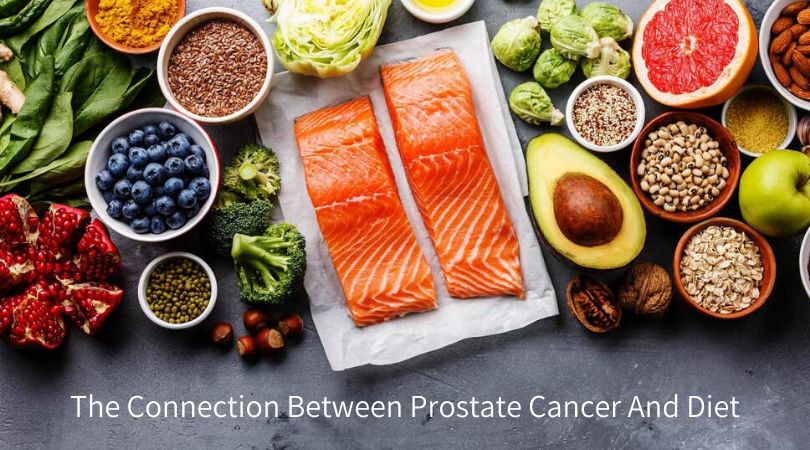 It is known that insulin is one of the growth factors of the prostate gland. In animal models, it was shown that a ketogenic diet or diets low in carbohydrates caused a slowdown in prostate tumor growth. A high intake of refined carbohydrates was significantly associated with an increased risk of cancer.

The ideal protein levels for prostate health are not well-understood. Recent studies in which volunteers participated revealed a pattern: low protein intake was associated with a reduced risk of prostate cancer. It contributes to the mortality rate increase among men under 65 years of age.

Animal meat consists of cholesterol, minerals, and other substances. The qualitative composition of meat, including its fatty acids, can vary depending on the animal itself, its type of food, area of residence, as well as on the conditions of preservation and storage of the meat product. Studies have detected that weekly consumption of skinless poultry meat is in no way associated with relapses or progression of prostate cancer.

Composition and cooking options can affect the risk of prostate cancer or its progression, for example, eating fish in a weekly diet, according to many studies, may be associated with a decrease in mortality rate from prostate cancer.

But cooking fish at high temperature (especially deep-frying), has been reliably proven, can contribute to the development of cancer. Thus, you can and should eat fish regularly, but strictly observing the cooking method.

Soy and soy-based products are rich in proteins and phytoestrogens. It may contribute to the prevention of prostate cancer, but direct involvement in tumor development has not yet been reliably studied. A recent randomized trial involving 177 men at high risk for the disease after radical prostatectomy showed that eating soy protein for 2 years did not affect the risk of prostate cancer recurrence.

A similar effect is exerted by the plant protein genistein, which is an isoflavonoid acting through estrogen receptors and, thereby, can reduce the risk of developing prostate cancer. It is found in legumes, as well as in coffee.

Animal studies have repeatedly confirmed that a decrease in dietary fat slows tumor growth, increased fat content in the diet, especially animal fat and corn oil. These can increase cancer progression. Opinions agree on one aspect: the type of fatty acid will play a crucial role.

Omega-3 fats, through complex mechanisms, to reduce inflammation, reduce tumor growth. The studies were carried out both with nutrition correction and with the use of additives with fish oil.

Canadian Pharmacy Meds staff outlines the main recommendations in the diet for men who want to reduce their risk of developing prostate cancer:

Diet should be as healthy as possible. Refined products, fast food, sausages are absolutely excluded. Preferred cooking methods: baking, stewing, steaming, slow cooker. You can use seasonings such as rosemary, turmeric, ginger, oregano, barberry – they diversify the taste and have a positive effect in terms of cancer prevention.

The basis of the diet should be vegetables, fruits, cereals, legumes, soy products, and fish. Dairy products are allowed, but they should not be the main source of protein in the diet.

Be careful about taking multivitamin complexes and supplements, especially those containing vitamin A and carotenoids. Be sure to contact a specialist.

Remember, it is necessary to draw up a diet taking into account all the existing diseases and problems in the body, so that, preventing one disease, not provoke another.